Dive into the history of one of Australia’s oldest higher education institutions.

Founded in 1917, ACPE has a long and illustrious history. In fact, ACPE first began as a physical education training institute for young women.

The idea of establishing the college originally stemmed from discussions between Evelyn Tildesley and Frank Stuart. At the time, Evelyn Tildesley was the Principal of Normanhurst School in Ashfield and Frank Stuart was a noted swordsman and physical training instructor who taught fencing to members of the Russian and British royal families (and who would go on to coach Australian fencing teams at the 1950 Empire Games and 1952 Olympics).

ACPE was created on Frank Stuart’s stance that the aim of physical education was to “gain physical perfection. It is not the ideal to gain muscular strength alone, but to gain the perfect balance, wherein a healthy body, working balanced against a healthy mind, achieves that coordination and harmony of body and mind.”

Thus, the college opened for operations at the Normanhurst School with just seven students, six of whom were Normanhurst graduates. Yet, soon the student body would grow and ACPE would eventually become one of Australia’s leading and oldest higher education institutions.

In 1919, the Australian College of Physical Education and the Swords Club became jointly registered — a connection that is reflected to this day in the ACPE emblem.

In 1948, Stuart and Ruth Hackney formed ACPE into a proprietary company limited by shares. As a previous graduate of the college and a champion athlete who represented Australia in fencing, Ruth Hackney became the college’s second principal and a lecturer at ACPE.

Ruth went on to provide one of the first homes for the college, which was situated in a large warehouse in Petersham. Under her direction, ACPE developed a reputation for producing outstanding teachers who were very much sought-after in the independent school sector.

Upon becoming the college’s third principal in 1970, John Butt purchased ACPE and moved the college to Croydon. From there, he introduced the first intake of male students in 1971.

As of 1976, the college was registered as a public company, limited by guarantee and not-for-profit. Following this, the college became a fully accredited degree-granting institution.

2017 marked 100 years for the college, leading to various centenary celebrations within our thriving community. We are so proud of the history of ACPE and what various of our students have accomplished. It’s incredible what you can achieve when given the right resources and support.

In more recent history, 2019 saw ACPE sold by Study Group to ACPE Holdings, which is the current owner of the college today.

Today, our dedicated staff and student body continue to uphold our values and to reaffirm their commitment toward becoming the best version of themselves. With a supportive community and opportunity galore, ACPE has paved the way for countless individuals to achieve success in the sports, dance, health, business, and physical education sectors. If you’re ready to reach your full potential and succeed in your chosen career path, check out the degrees and courses we offer. From all of us at ACPE, we can’t wait to meet you and have you join this incredible and motivating community. 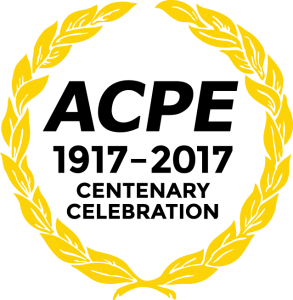